Rule violations that result in a point for the opponent

The court diagram shows the official volleyball indoor specifications. The official indoor court dimension is 9 meters by 18 meters with an attack line 3 meters from the center line. 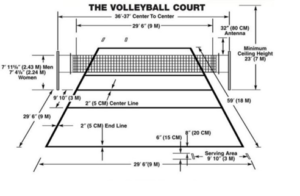